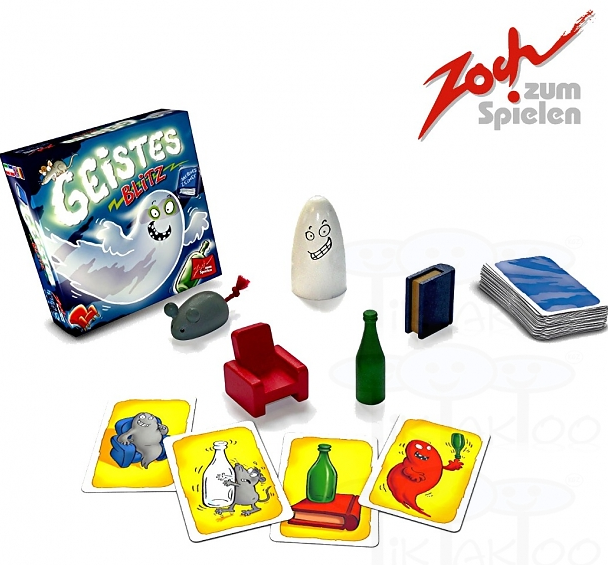 Version: This is the original version, but Geistesblitz 2.0 is also available. The rules are exactly the same in 2.0 but the pieces are different. I have seen an even harder version called Geistesblitz 5 vor 12 but have not tried it yet.

Players: 2 to 8. You could fit more in but that would be quite crazy!!

Time to play: Box says 20 to 30 minutes, which is about right. Could be faster.

Price Range (AUD): $19 to $50 depending on where you go and whether you buy locally or get it shipped.

$19 to $25 is kind of reasonable. $15 would have been a good price. Some online vendors sell it at around $30. Anything above that is ridiculous.

Availability: Not that common (as it is German) but not that rare either. Can be found online.

8.1+* out of 10. (Great; excellent if played with friends who love a good puzzle + dexterity game - See my Rating Scale)

I admire this game design because the game mechanics are simple, clean and unique. Simple is often, but not always, better. The game is basically a grabbing or "first to react" game but in the context of a brain teaser.

My appreciation and liking of this game comes purely because it uses a novel and unique concept that makes for a great dexterity game. (See Rules & Components below for a better idea)

* July and October: Reduced score from 8.5. This is a fantastic game whose unique (+ quick) gameplay and rules are the sole reason why I scored it so highly. However, not everyone will enjoy if they feel intimidated by brain teasers and/or a game that requires quick reflexes. In some respects, it reminds me of Ricochet Robots because it satisfies a nice niche in one's gaming collection (brain-bending games) - though obviously Geistesblitz is arguably the more accessible than Ricochet Robots because the inherent "puzzle" of the game isn't so challenging. In summary, whilst it's a very good game I'm not sure if I can give it the label of "excellent". It's also a love-or-hate game - not everyone likes challenging dexterity games.


People who enjoy brain teasers in a competitive (and sometimes relatively tense!) environment should like this game. If not, you probably won't like this game.

Do you recall that brain puzzle where a particular colour is spelt out in letters but each of the letters are coloured with a colour different to the spelt out word? Wikipedia tells me this is called the Stroop Effect. Whilst not entirely similar, this game reminds me of the Stroop Effect.

--- This concludes the basic overview of the game.
If you are interested in reading about the components & rules to the game, please read on ---

5 objects are placed in the middle of the crowd, within roughly equal grabbing distance from everyone (hence a circle is preferable)

It is important to clarify what each of the objects are:


For the first round, someone randomly draws the first card of the deck. Everyone looks at the card. [Winner of the round gets to draw from then on; that is how I play anyway]

Rule #1 (This rule always takes precedence): If the exact item in terms of COLOUR and ITEM TYPE appears on the card, grab that item.

Hence, as in this card below, if you see a green bottle on the card, grab the green bottle! 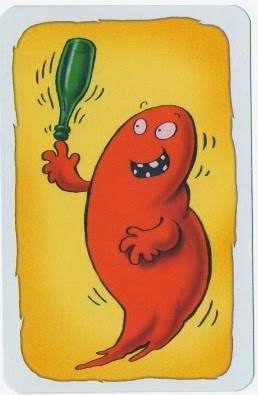 Hence take a look this example below. 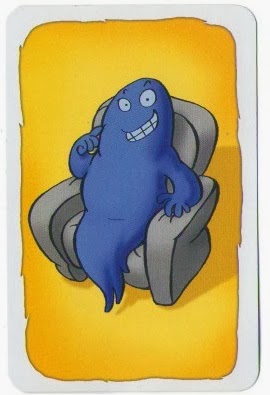 We do not have a Blue Ghost to grab (the objects we have are a Blue Book and a White Ghost). We also do not have a Grey Chair to grab (we just have a Red Chair and a Grey Mouse).

Hence, you can't grab the Ghost and the Chair as those objects appear on the card.

You also can't grab the Mouse or the Book as the Mouse is Grey and the Book is Blue (and those colours appear on the card).

Hence the answer is the Green Bottle as the colour and item type completely does not match any of the items on the card.

If you got the answer correct, take the card as a reward.

Whoever gets the most cards after the deck is exhausted wins.