Only for the most die hard dice-rolling fans who love to push their luck.

Version: Gryphon English Edition. Since this is an old game it has been republished numerous times. The supposed story goes that the game was so unpopular commercially (perhaps I know why - see below) that it became out of print, but a later revival brought it back to life.

Time to play: The box says 30 to 40 minutes but from my experience it can take A LOT LONGER than that!

I think the price isn't worth it to be frank, given that you could buy some other great games (unless you really really enjoy risk-taking or dice-rolling games). I saw that an older version can be shipped for $159 but that truly is a ridiculous price.

Availability: Quite widely available online; I'm unsure if you can it find in local shops.

In theory, this is supposed to be a good dice game that works on a great risk-taking mechanic.

However it is heavily spoilt by the factor of playing time [and I accept that I may be giving too much weight to this criticism but, honestly, it really does bring this game to its knees]; from my experience, the game can simply take far too long to finish especially if everyone chooses to be heavy risk takers. Perhaps it's just the people I play with!

However, you can increase the speed of gameplay by using Sid Sackson's "Variant 4" in his rules - which allows players to jump over other player's traffic cones. This should, theoretically, reduce the length of time taken up to play the game and probably makes for a better experience!!

*If you play with this rule, I would give the game something closer to a 6.4, and perhaps, but maybe not quite, a 6.5

Unless you are a dice enthusiast, I wouldn't recommend trying this game if you are looking for something relatively short (especially if you hate repetitive gameplay and aren't the patient type). However, if you are adventurous and would like to see an interesting game mechanic, I would recommend that you give this game a go at least once. Especially if you like a mildly tense game.

That being said, at a conceptual level the game is highly interesting.

In short, the game provides a dilemma, and either choice you make has both benefits and disadvantages. After rolling dice for one or two rolls, you have one of two options:

1) Continue to roll dice. The game (and your opponents) will 'force' (still your choice of course) or peer-pressure you into CONTINUING to roll dice. This option helps you to advance further in the game, possibly achieving victory quicker OR

2) You can choose to SAVE your progress after making some grounds. This option is the conservative approach and helps you "steadily" get to victory, but will be a lot slower.

The tension of the game is that if you choose Option 1 (ie. continue rolling) you may lose ALL your progress if the dice you roll isn't what you need it to be (see rules below for a better idea). That's right, so whilst you could win the game quicker via option 1 you could lose EVERYTHING you rolled on that turn!

To say this another way, if you keep doing Option 1 too many times and fail repeatedly (thus no or little ground is made), there is the possibility that those who have chosen Option 2 will gradually and slowly make their way to victory before you. But, again, those who choose Option 2 too much may lose out to someone who is willing to take more risks, as those taking Option 2 proceed at a much slower (but safer) pace.

If you like the thrill of taking chances, and don't mind repeatedly doing what is essentially the same thing over and over again (which isn't everyone's liking), you should give this game a go.

Everyone gets 11 traffic cones of their colour.

The overall aim of the game is to reach the end of 3 columns on the below game board before anyone else does. 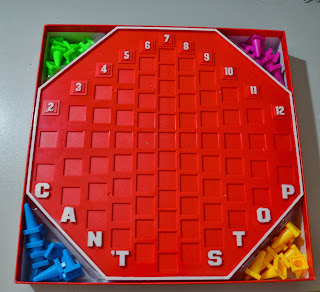 On your turn you will firstly have to decide which 3 numbers on the game board you want to progress in, which is in turn based on what you roll.


To do this, you are given 4 dice to roll and 3 "temporary" white traffic cones as below. You must always pair the dice together so that they add up to two numbers.

Suppose that this was Green's first roll. Green can choose to pair two dice together to make different numbers.

For example, Combining 5 and 2 gives Green 7. This automatically means that the other pair of dice (1 and 4) adds up to 5.

It's up to Green. So suppose Green chooses to keep 5 and 7.

Green would then place their white cones on the board as below, representing progress in the 5 and 7 columns:

Then Green must roll the dice again to choose their 3rd number (and final white traffic cone). [Note that choosing 3 numbers may sometimes take longer than 2 or 3 rolls if the two combinations of dice keep producing the same number]

Suppose Green then rolls this: 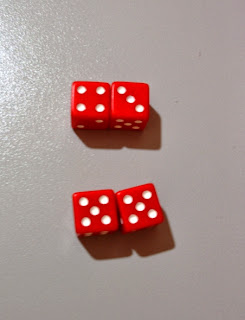 10 is a new number and 7 is a number Green has already picked with their white cone.

Thus, Green gets to move their white cone up 1 space for the 7 column and place a new white cone at the foot of the 10 column as below:

(Note that if the second roll produces two different numbers not already taken up by a white cone, Green must pick only 1 of the numbers.


All 3 white cones have now been placed.

At this stage, Green can choose to save their progress OR keep rolling. If Green chooses to keep rolling then IF he/she does NOT get the same 3 numbers on the board (5, 7, and 10) Green will LOSE ALL PROGRESS FOR THAT TURN ONLY.

I'll show you what I mean.

Suppose Green opts to continue and they get this roll below: 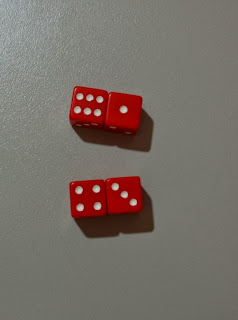 Green then moves their white cone in the 7 column up two spaces again and then OPTS to STOP and SAVE. When Green saves Green gets to put their coloured (green) traffic cones like so:


Thus, this ends Green's turn and next time, if Green ever rolls a 5, 7 or 10, they can start off where they stopped by placing a white cone on top of their existing green markers (see very last picture "A note on future rolls/turns"). This is a pretty conservative approach and usually my friends and I never stop this early.

However, suppose that Green gets ambitious and decided NOT to save their progress and continued to roll to improve the position of the white markers. Green then received this roll: 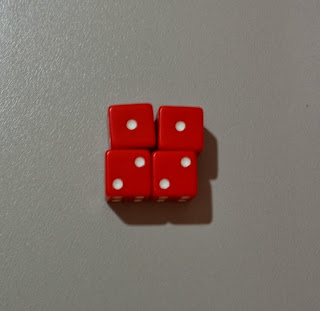 Green then would lose all their progress if they didn't opt to save.

However, there is a very real possibility that Green would have continued to roll 5's 7's or 10's and continued moving up the white cones in those respective columns. It is up to Green when they want to stop.

Hence you can now see why the name of this game is called Can't Stop - as the person rolling often has the temptation to keep on rolling to see how far they can go.

When it is another colour's turn, they (eg. Blue) can of course choose to land their white cones (and save their progress) on top of cones of other colours.

However, to speed up the game (it can take a long time to reach the end of the columns), it is recommended that you play Sackson's "Variant 4" in his rules, which says that players' cones must jump over cones of another colour. This means that it may be advantageous to roll numbers where other colours are already existing as you can skip over other people's checkpoints.

A note on future rolls/turns

Green may of course pursue other numbers in other columns (that's why everyone gets 11 traffic cones, 1 for each of the 11 columns).

Then Green may put a temporary marker on one last number for their next roll of dice, which can of course include the 5 or 10.

If Green loses all their progress by not rolling any of those numbers where their white cones have been placed, Green does not need to restart the 7 column from the beginning but can restart from where that permanent green marker is.
___
Posted by Andre Lim at 17:24